Even though moving is a huge pain and disruptive, it often offers opportunities to find things that were once thought lost forever.  Or sometimes it allows for one to discover lost treasures or once again become reacquainted with a cherished, but seldom used, object. And sometimes things just get lost in the shuffle.

Due to my purging tendencies I didn’t have too many discoveries, a noted disadvantage to being an organized minimalist.  I did, however, find three things of importance.  One was a membership card that I “lost” years ago and had already paid $25 to replace.  Ironically, I found the card in its usual place, a dresser drawer.  The card had managed to slip in between the papers I used for a drawer liner.  Although I had moved the drawer liners to search, the card remained undetected caught in between the sheets.

The other card belonged with “The Breathe Easy Deck” (meditation cards) and was one of my favorites. My mother had the same deck and graciously agreed to supply me with the missing card, thus rendering her own deck incomplete.  I was pretty excited when the card materialized pressed against the wall after my night stand was moved.

The third thing was a perpetual calendar with an inscription on it to my father.  It had been given to him as a present for his years of service as a public high school teacher.  Some months ago it had fallen behind my dresser, unnoticed, and remained there until the dresser was moved.  Good find!

On the flip side, I lost my umbrella in the move.  I found the case for the umbrella (pictured below), but not the actual umbrella.  I know it can be replaced, but I’ve had it since 2007 and I was rather fond of it.  The top was pink and the underside was covered in flowers.  I bought it during my Vancouver years after a friend advised me to buy an umbrella that I liked looking at since I would be spending a lot of time under it. 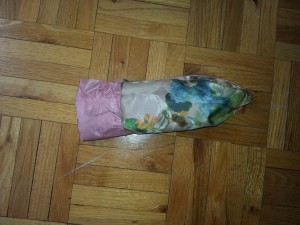 The umbrella case flipped inside out to show the pink outside and pretty floral print from the underside.

I also lost a small gadget I liked about 6 months ago.  I resisted buying a replacement because I was positive that it would turn up when I eventually moved.  It didn’t.  *sigh*  Looks like I’ll have to buy a new one after all.

All things considered, not too bad.