Last night a new notification appeared on my iPad that a new photo something was ready for me. Curious, I unlocked my iPad and investigated.

I scrolled through the newly noticed area of my Photos app in horror. The “For You” area features Memories, essentially slide show movies that have been created by the app. I don’t keep many photos on my iPad, but if I did, I’m sure there would have been dozens more.

It was easy to see that many memories had been created by assembling a collection of photos based on the date they were taken. This is how the older version of Photos (iPhotos) used to create Events. 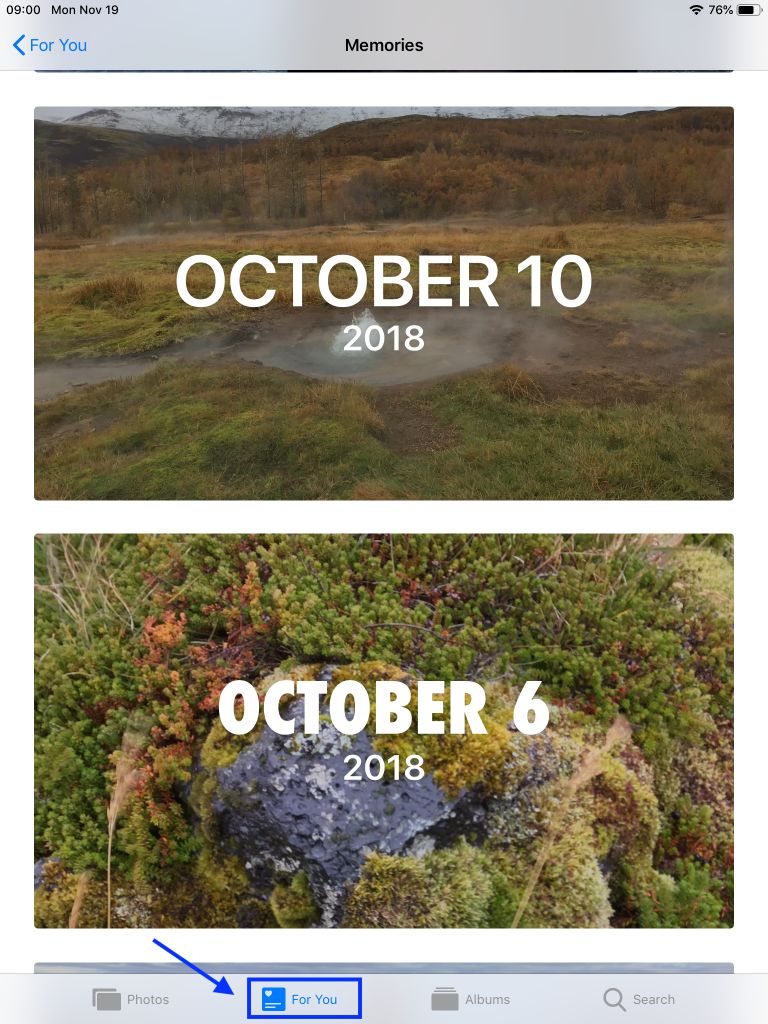 These Memories are of my recent trip to Iceland.

But then there were other albums based purely on facial recognition of me and other people!

The notification had been for a new memory called “Portraits of… Photos from 2014 – 2018” and featured photos of me! Clearly this one was created from the app using some kind of facial recognition software. Intrigued, we pressed “play” and watched my image flash before our eyes, to music.

After watching it, we explored the options offered to adjust the length (short, medium, long) ranging from about 15 seconds to slightly over 2 minutes. We also changed the background music by choosing from a range of options including: dreamy, sentimental, gentle, chill, happy, uplifting, epic, club, and extreme.

Some of the other non-dated memories included one called “Best of the Year 2018,” and one featuring a friend of mine that I went on vacation with in 2016. Most of the 2016 vacation photos have been removed from my iPad, but a handful still remain. Oddly, the “Best of the Year 2018” didn’t feature many of my favorited photos but did include some bad ones and an internet download.

Before blogging this post, I looked at the “For You” Memories again in the light of day. I realized that you can add/delete photos and make other edits to the font, text, music, etc.

My partner thought it was cool and I thought it was creepy. I don’t like the idea of an app perusing through my photos and making “memories” for me, even if I can adjust them later (read more here). And I have mixed feelings about the improved accuracy of facial recognition software. It’s useful and invasive, at the same time.

How do you feel about apps creating your memories?