Over the holidays I had my first foray into virtual reality.  As if we haven’t already been living in an altered reality from the US presidential election and president-elect Trump rewriting nuclear arms policies in a 140-character tweet.  Now we can create a new reality, or escape from our existing one for a brief period of time, through the use of a virtual reality viewer.

Earlier this year, the NY Times sent my mother a cardboard virtual reality viewer. I assembled it and immediately downloaded the NY Times VR app to check out the options.  The viewer isn’t necessary, just a smartphone. 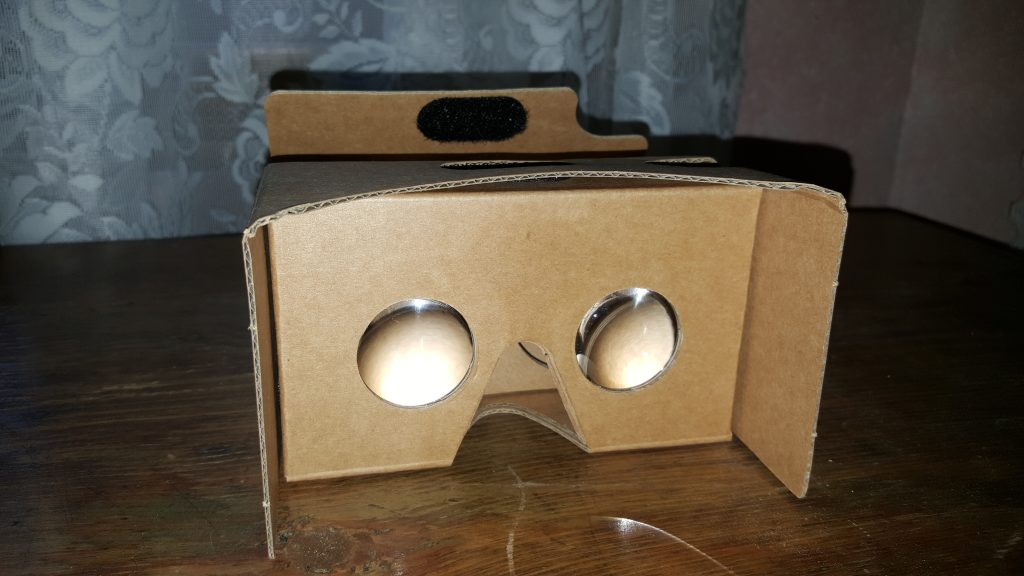 Cardboard viewer from the NY Times. My smartphone fits in the back and then the flap is secured with velcro holding the phone in place.

Fortunately, the first couple of times I used the virtual reality viewer in an open area.  That way I wasn’t hitting and bumping into things as I swiveled my head and spun around trying to see everything.  First I watched a video about detainees in England and got to walk around their tiny prison cells to “experience” their reality.  Then I switched to something more upbeat, a redwood forest meditation followed by another video of a herd of bison.

I realize that the free cardboard viewer is pretty basic compared to the more sophisticated ones available for purchase, complete with something to hold it on your head.  A quick Google search revealed a number of virtual reality viewers already available on the market.  I had to hold mine against my face which got pretty tiresome for my arms after a while.

In November I went to an exhibit called “Small Wonders: Gothic Boxwood Miniatures” at the Art Gallery of Ontario (AGO).  It was days after my LASIK surgery and I remember feeling enormous relief walking around the dimly lit exhibit area.  It was pretty amazing to see these miniatures, some of them only the size of a clementine with such intricate carvings layered inside.  I felt a bit sad that the virtual reality display, which would have allowed us to “walk” inside one of the miniatures was not fully operational when we went.  However, we saw a video of the VR experience which looked pretty neat.

It’s still early days for virtual reality, but I can already see how it will begin to be incorporated more into our everyday experiences.