I’ve noticed that a lot of sync services work beautifully in one direction to save or backup. When deleting something, however, the services are largely asynchronous, meaning objects and services aren’t synced for deletion.  Let’s look at a few examples of what I call the asynchronous sync.

I use an Android smartphone and my photos are stored in a Gallery.  Presently my Gallery uploads automatically to my Dropbox. This is how it works:

Photos taken with smartphone are saved in phone Gallery and automatically backed up to Dropbox. Gallery = Dropbox = Sync

It’s important to understand how the sync works to use it effectively. In this instance, Dropbox is designated as my photo backup so it makes sense to save everything synchronously, but not delete it the same way.  If I was able to delete synchronously, meaning if I delete a photo in the Gallery it will automatically delete in Dropbox, it would defeat the purpose of having a backup.  I just need to remember that when I want to delete something, I have to do it in two places to maintain the sync: the Gallery and Dropbox.

Photos now exist in two separate instances: Gallery and Dropbox. Each one must be deleted separately.

My habit is to go through my photos before backing them up.  It gives me an opportunity to delete anything I don’t want and organize the rest into albums.  For the sync to work effectively for me, I must change my setting to backup manually.  This means that after organizing my photos, I will manually select them to upload to Dropbox.  This will save me the headache of having to delete unwanted photos in two places.  Additionally, I can safely delete photos from my Gallery to save space on my phone and know that the ones I want to keep are backed up.

The pre-backup organization also comes with a few synching rules to understand depending on which device and operating system is being used.  My Android smartphone offers options to Move or Copy photos.  Move means photos only live in the album in the Gallery. Copy means the photos live in the Gallery and in the album so they remain accessible in two places.  Similar to backing up in a Dropbox, this means copied photos also have to be deleted in two places: the album and the Gallery. Add in a third place to delete if everything was backed up automatically to Dropbox. 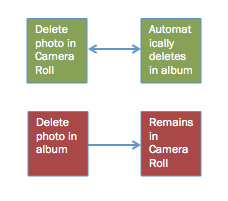 It might seem obvious but I knew somebody once who spent hours organizing her Camera Roll into albums on her iPhone.  Then she deleted the Camera Roll thinking that everything was in her albums and accidentally deleted everything.  Oops.

Having a backup is a great idea, but it’s important to understand how the services work and how to make it work for you. It’s also important to know what data is residing in which place.

Do you backup your photos before or after organizing them?  Cast your vote in this week’s poll.

← The Human Touch: Forgive and Forget
There’s an app for that… →

2 comments for “The Asynchronous Sync and Digital Photos”