On this day in 1988 I had my first bassoon lesson. It was one of those random, flukey things that can happen in one’s life with a lasting impact. Initially I had decided to play the clarinet, not so much because I liked it, but because it’s a versatile instrument. My band director approached me and said how about I try the bassoon instead. With only a vague idea of what a basssoon was, I agreed and took home the Box.

I arrived home that day, opened up the box, stared at the pieces for a few minutes before closing it again. I decided to wait for my lesson later that week.

Very confusing how the parts fit together, especially in the days before Google and YouTube.

By the end of the lesson, I decided that this was the instrument I wanted to play. I still remember how amazing it was to breathe through the instrument and flap my fingers around to make all these cool sounds. I still feel that way, thirty years later. In that first hour I learned how to assemble the instrument, play an F-major scale and E-flat. More than enough notes to do some damage. 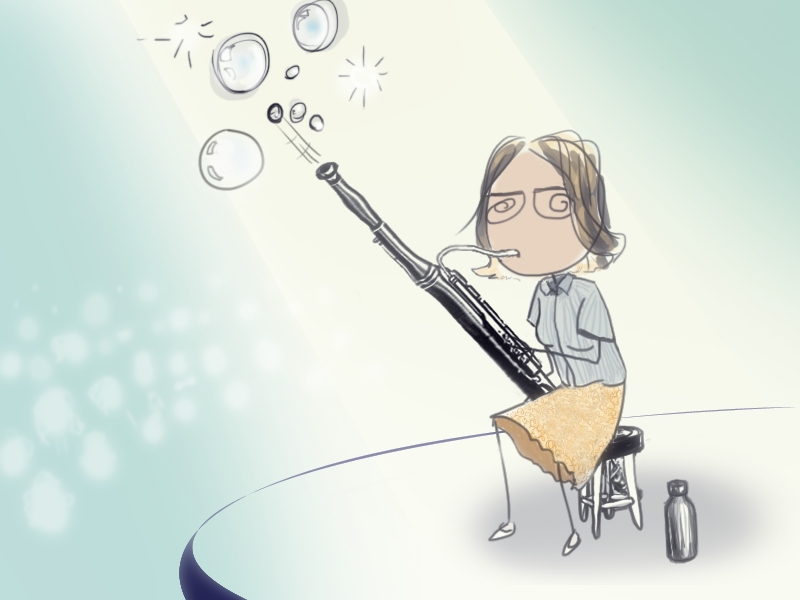 I left the lesson completely enchanted and motivated to practice. In the beginning my practice sessions were short, but frequent. My lips were not used to the hardness of the reeds. But I was diligent and used to practice in short spurts multiple times in a day. I guess it got a little out of control. One of my earliest bassoon memories is of my older brother complaining to my parents that I couldn’t just play whenever I felt like it. I needed restricted practicing hours. At the time I figured it was sibling rivalry and my brother’s failed attempt to thwart my creative genius. For years I was only allowed to play from 3-4 and 7-8.

I have since had a change of heart about that. Some years ago I was subjected to the playing of a new bassoonist, something like a cross between an animal being sawed in half and rusty hinges. I had a new appreciation for my brother’s complaints and a new respect for my parents. Maybe I wasn’t as good as I thought I was when I started…

Playing the bassoon is still one of the greatest joys of my life. I feel lucky that the “right” instrument picked me so many years ago.