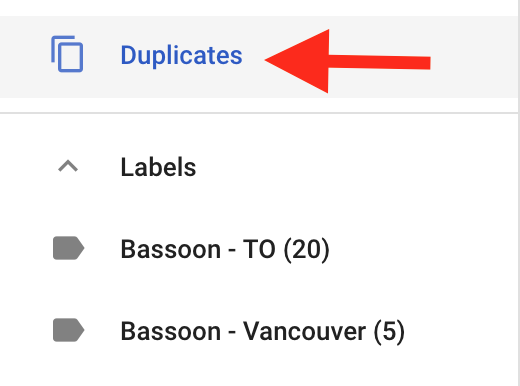 Duplicates feature will only detect an EXACT match. Even leaving off the “1” in front of a phone number makes a difference.

Before I started assigning groups and editing entries, I made sure the master group, My Contacts (assigned by default) was in place. That way I knew how to find someone quickly during and after the transition period.

My first level of grouping is Personal and/or Professional. From there I use more specific terms.  For example, I have a Musician group, but also two bassoon groups. You can assign multiple groups to each contact providing multiple access points. One bassoon buddy is in four groups: personal (friends), professional (we’re both small business owners), musician, Bassoon – TO.

Another useful thing about groups is they can be used to filter views or send a mass email by typing in a group name.

Initially I exported my contacts to a spreadsheet so I could change everything at once, but it didn’t work out for various reasons. Instead I scrolled through my master contact list to select contacts for each group. This felt painfully slow and tedious so I did all the easy, high priority ones and stopped. Now I change as I go. Basically, anyone that was missed will get added in the next time I touch his/her contact info.

Now that I have a system in place, it’s super-fast to make changes so I do it right away.