After another long, rocky night of travel on the boat, we ended up on the west side of Santiago Island at a place called Puerto Egas. It was the same island where we went on our first excursion back in time, but the west side offered totally different terrain including a wet landing onto a black sand beach.  Sea lions dozed peacefully nestled into the rocks. The marine iguanas blended in so perfectly with the sand I had to watch carefully not to step on them. 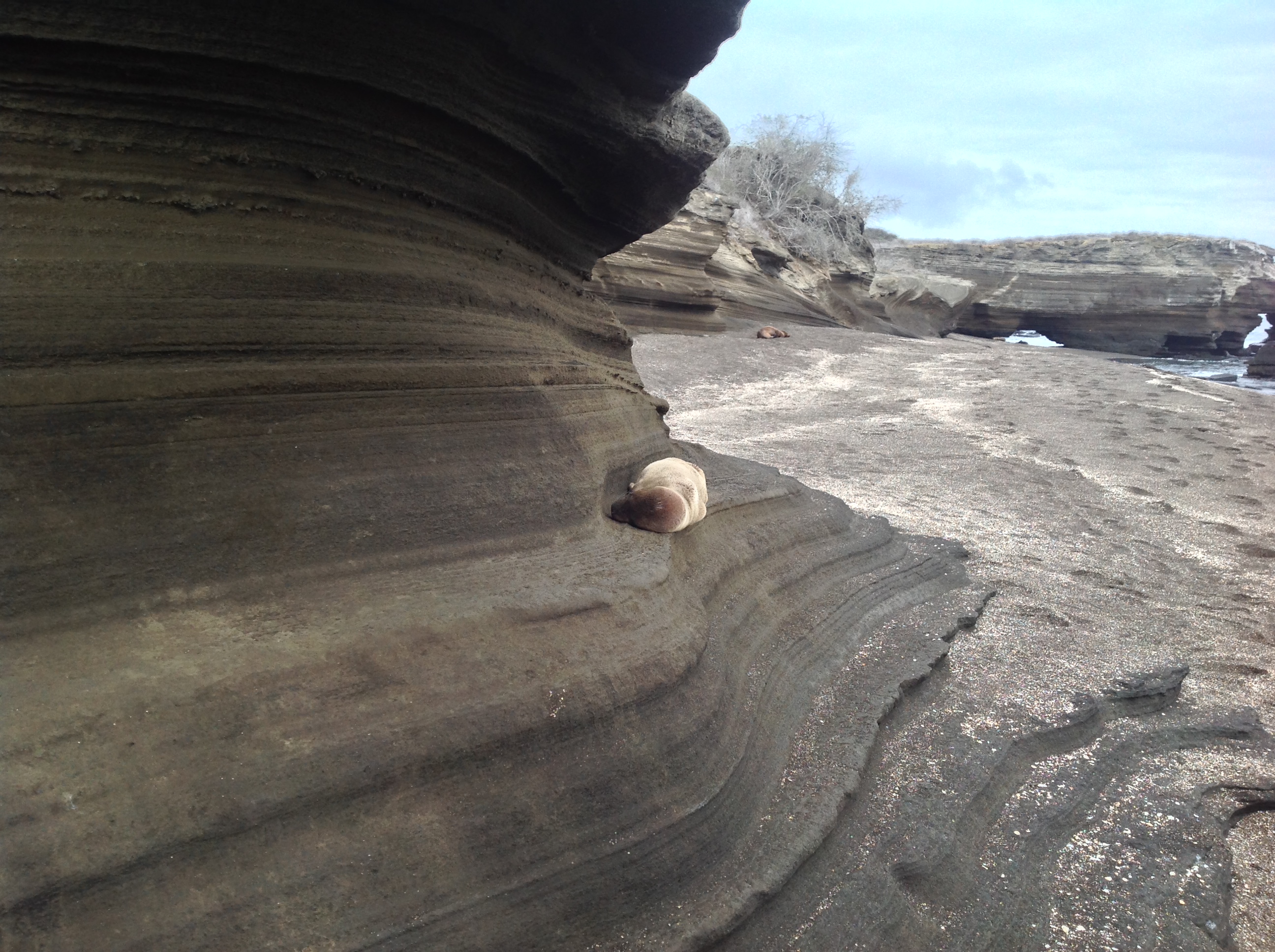 Landing on the black sand beach. A small sea lion pup napping on a rock edge. Sea lions lounged everywhere in the rock formations. Marine iguanas lazed about on the sand.

We hiked along a dusty, sandy path and had the good fortune to see a Galapagos Hawk, the top predator of the Galapagos Islands. On this particular island the hawks have adapted to become polyandrous (one female, many males), instead of the life-long, monogamous pairing typical of hawks. 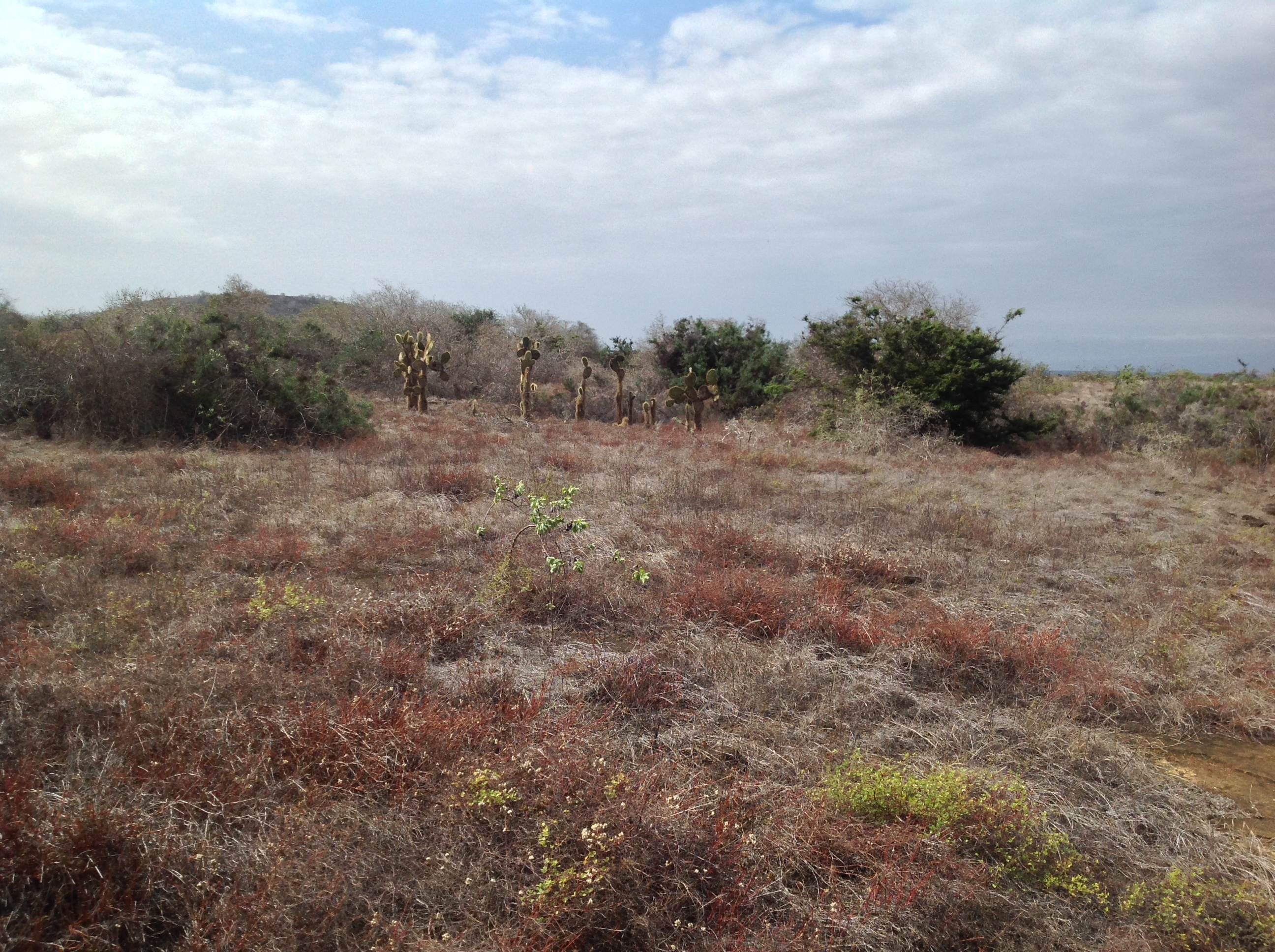 Scenery along the sandy trail to the coast. It was arid and scrubby looking filled with cacti, acacia trees and lots of sharp, pointy brush in muted tones.

Eventually the trail led us to a lava beach. Sea lions frisked around in the diaphanous blue-green waters. I was fascinated by a spot nicknamed “Darwin’s toilet” aptly named due the waves filling up and draining a particular hole in the lava with a flush-like action. Marine iguanas lazed about on the rocks soaking up the sun. 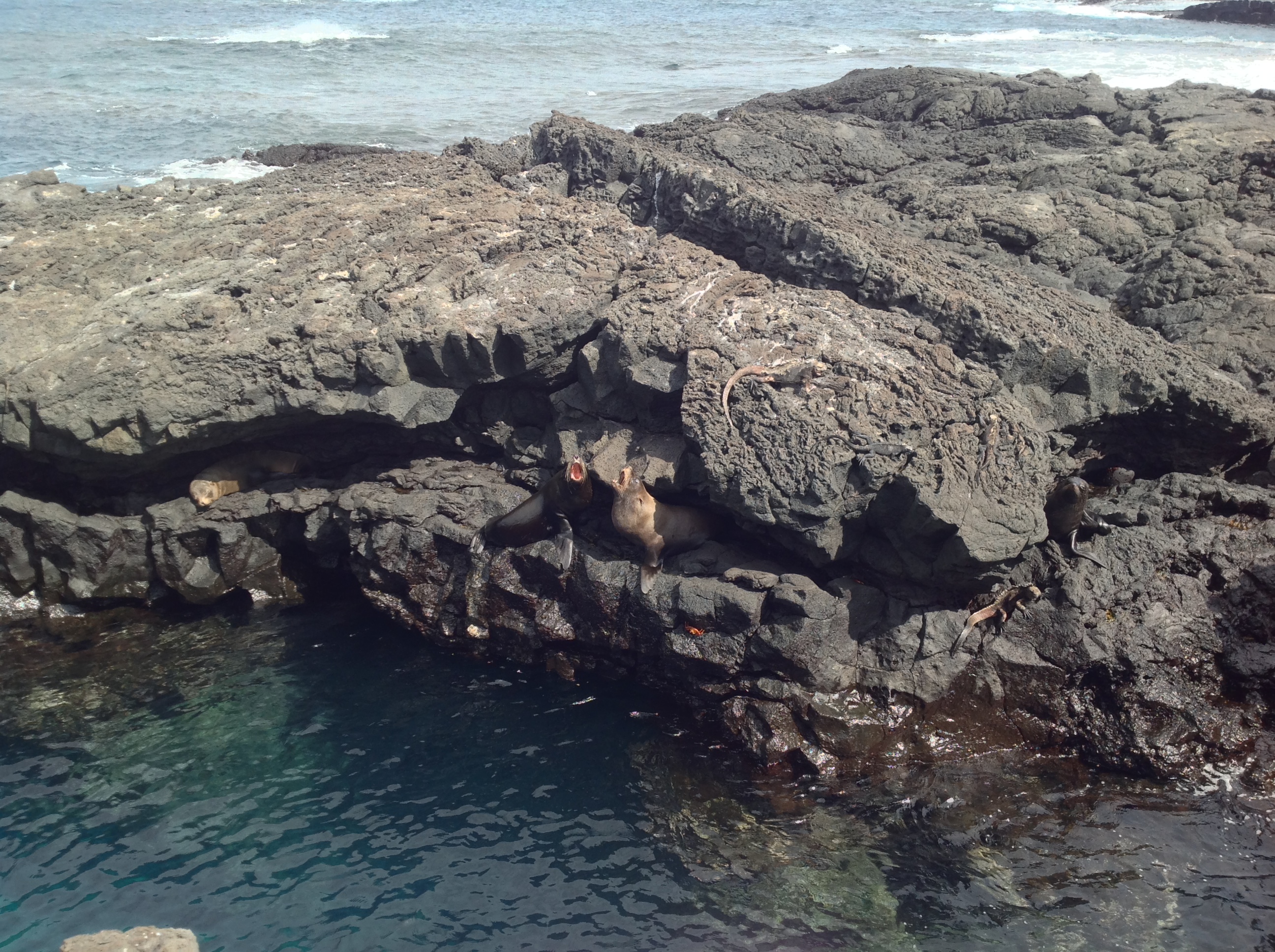 Two alpha males fighting for the prime spot of rock. They were rather raucous. If you look carefully you can also see a few marine iguanas (look for the tails) and the bright red Sally Lightfoot crabs.

We returned to the boat for our snorkeling gear and headed back to the black sand beach. I was lucky enough to see a giant sea turtle resting quietly on the sandy floor of the ocean, partially obscured by a school of tiny fish. On the other side of the beach I watched another sea turtle quietly grazing on a patch of sea lettuce, waving gently in the currents. Just before we had to leave I spotted two white-tipped reef sharks. My initial response was one of panic before I remembered to calm down so as not to attract any unwanted attention.

In the afternoon we headed to Buccaneer Cove for deep water snorkeling.  I saw my first starfishes, which prefer to live in colder waters. One was called a chocolate-chip starfish because of the dark, chocolate-colored markings on it. 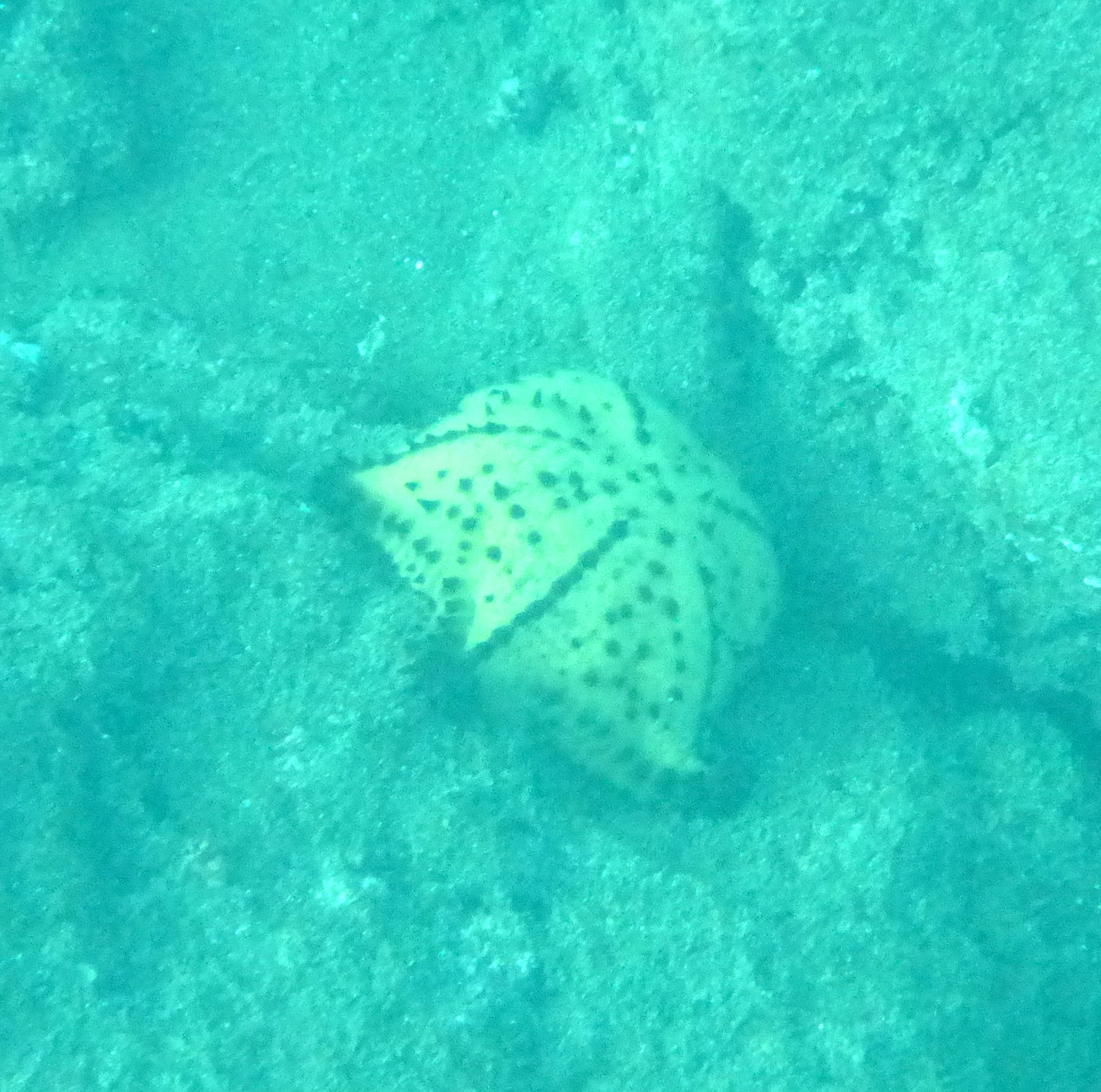 A chocolate chip starfish. Starfish like colder water so I actually had to dive down to get a picture of this one.

Bonus picture of a pelican. I accidentally got sunscreen on the lens so there’s a bit of a smudge on the image. 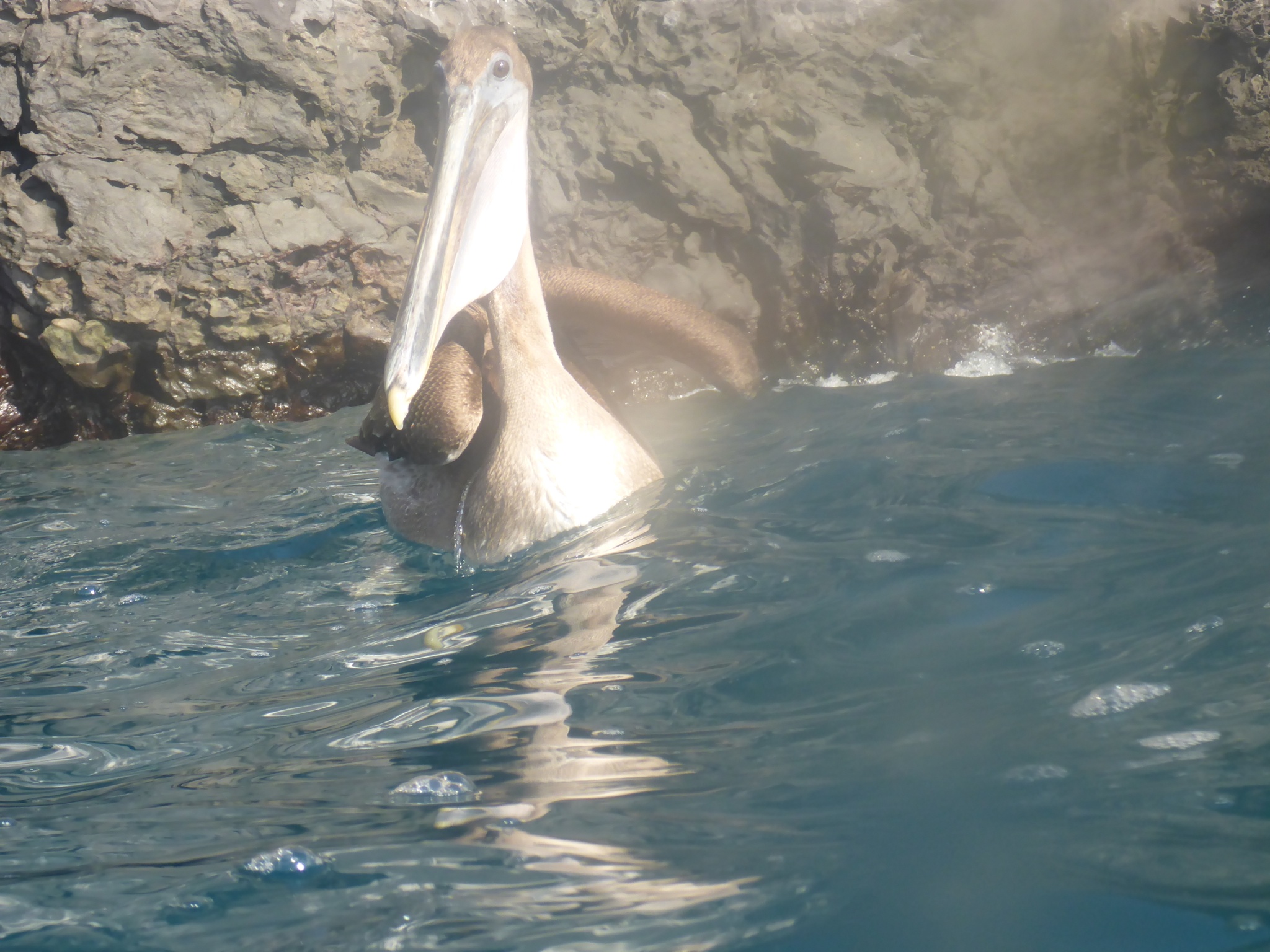 One of the many curious pelicans that would cruise over to check me out while I was in the water.