The next day started at Yrti Tunga, a beach. (Click here for another picture.) We were surprised to see sheep eating seaweed. Their shaggy coats blended in perfectly with the surroundings. 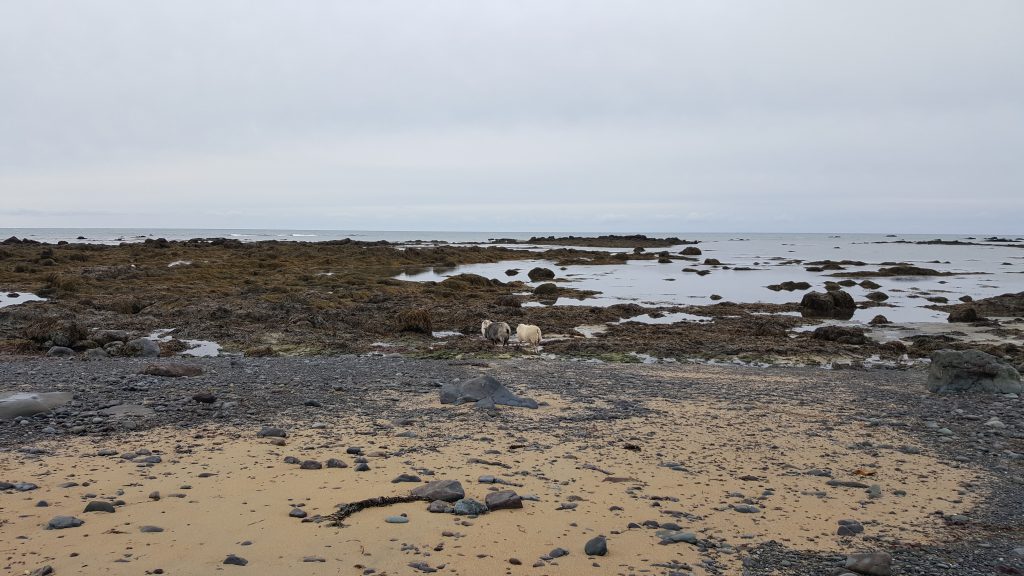 We left the beach and headed for Arnarstapi, a fishing village. Along the route, we passed a scenic viewpoint of where Iceland’s most famous serial killer, Axlar-Björn, murdered his victims. In the mid-1500’s he hosted travelers passing through in his farm house, but supplemented his income by killing them and stealing their money and horses.

Soon after we arrived at the harbour, for a walk along the coast to see blowholes, basalt cliffs, arches, and lava formations. The beginning of the trail started with a giant statue of Bárdur Snaefellsás, a half-troll/half-man who settled the area and still remains its protector. 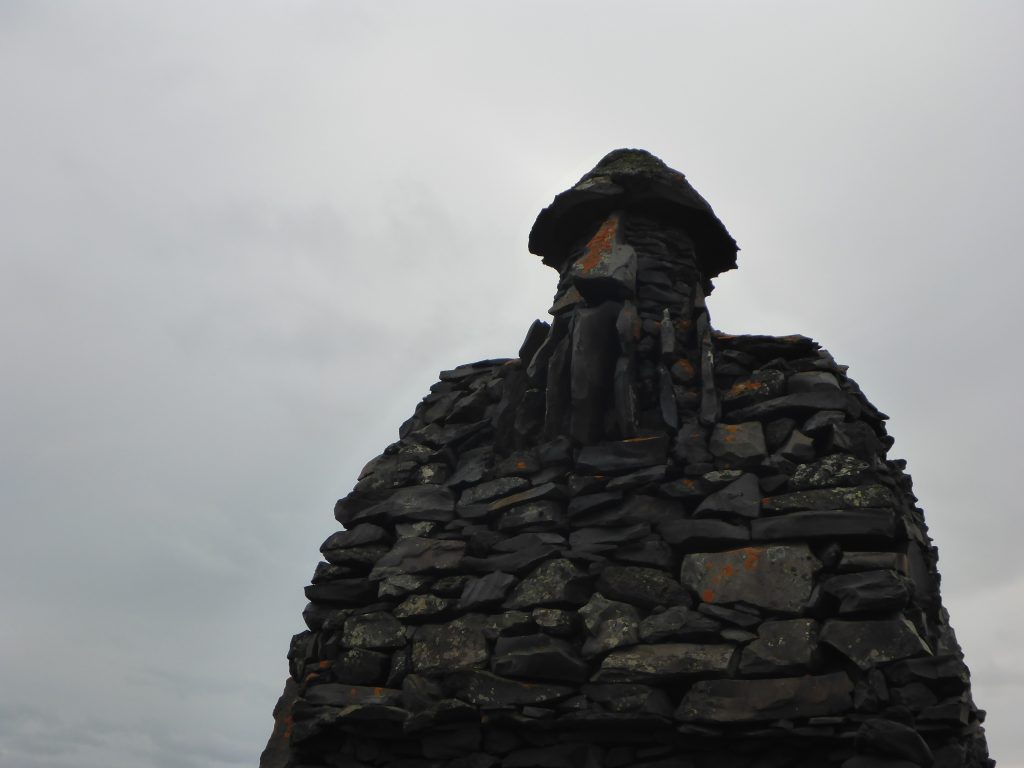 Everyone posed for pictures with the statue and touched it for good luck. Then we were ready to begin. The lava formations and basalt columns were stunning. It was cold and extremely windy. Almost too gusty to take pictures, but somehow I managed by clutching my camera tightly with two hands. 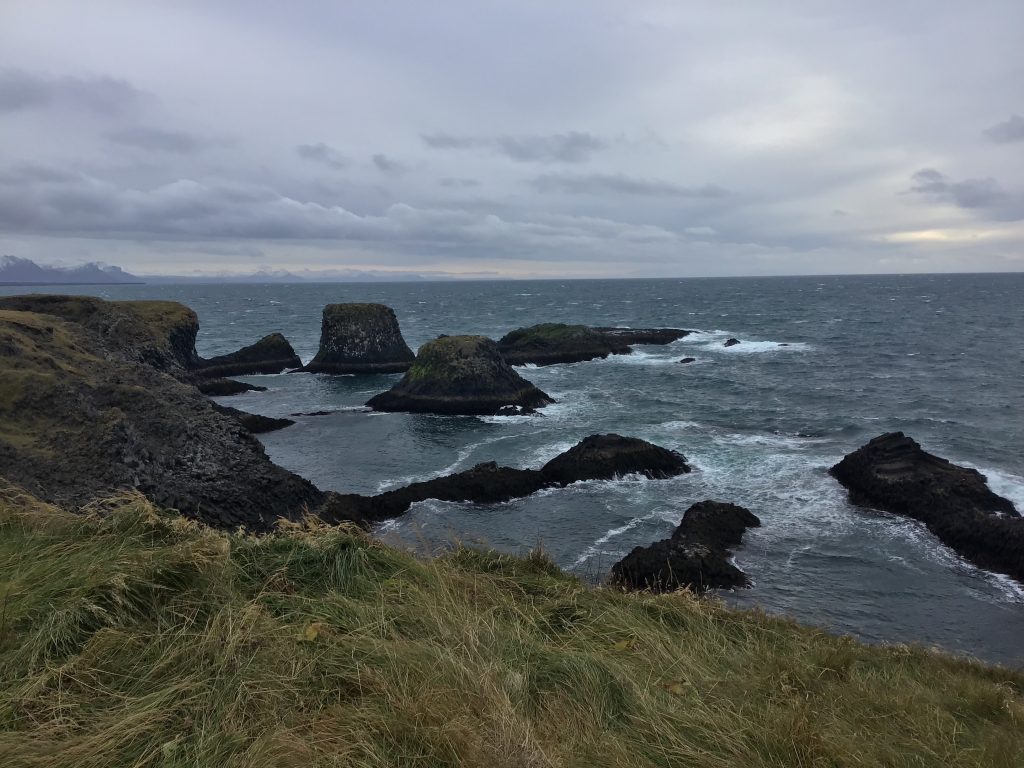 At the end of the walk we gratefully boarded the bus, appreciative for the protection against the elements and headed to lunch. A short drive later, we arrived at a small restaurant. We crowded in for hot soup and fresh crusty bread smeared generously with butter. Lunch was followed by some kind of creamy, silky skyr, an Icelandic dairy product. It’s like yogurt, but with a light custard-like consistency and not as sour.

After lunch we headed to the Snaefellsness Peninsula. The conditions were terrible. Even so, my family and I decided to hike into the mossy lava fields to see a crater plug. The winds whipped around us, threatening to carry us off by billowing our rain pants out. 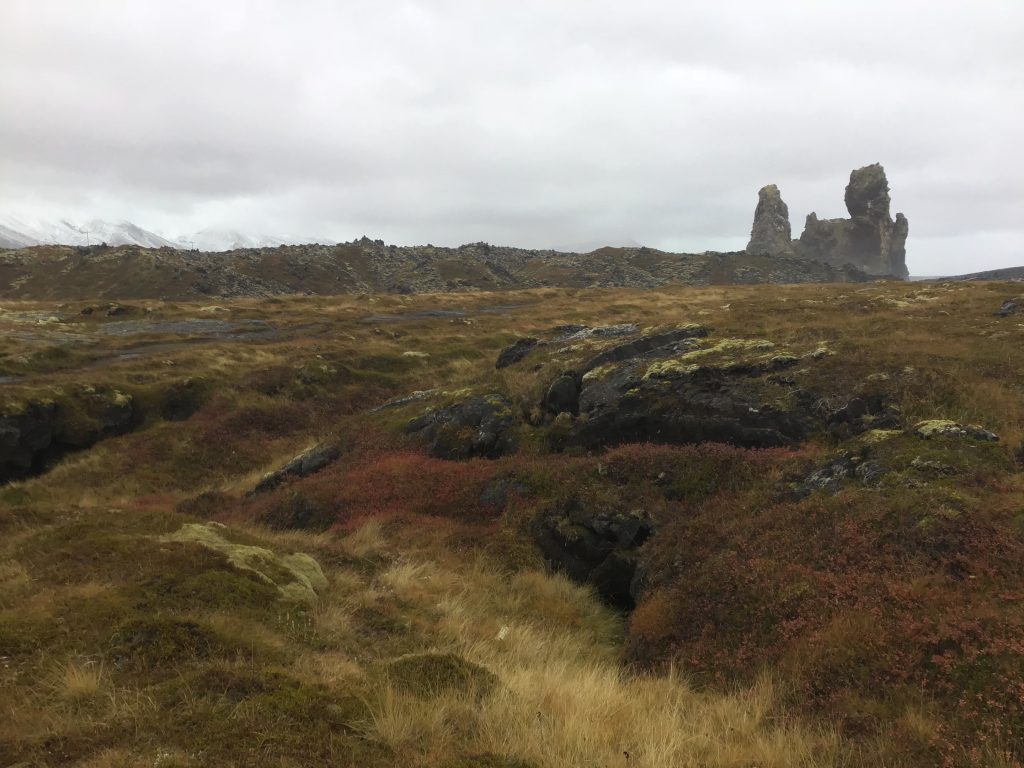 The crater plug in the distance. The strong winds prevented us from getting closer.

We were supposed to walk around a volcanic crater on the way back. However, the winds were so strong that the bus almost had to stop driving. Our outdoor excursion was cut short and we headed straight to the last stop on the tour, a Shark Farm.

Except for the exquisite scenery surrounding the shark farm, the photo opps were limited to drying racks strung with liver-colored hunks of fermented shark meat. Since sharks are one of my favorite animals, I did not try the hárkarl (pronounced kind of like how-karlk).