Last Thursday I performed Mahler 2, The Resurrection Symphony, with a local orchestra and choir.  For the first time in years, the concert was not recorded.  I made sure to pay close attention to what was happening around me, not just because it was the performance, but because I wanted to be able to recall the parts I enjoyed later.  I was left to my own devices to capture the music in ways that couldn’t be reproduced digitally.  The way I felt hearing a duet between the English horn and bass clarinet, the majestic, sonorous sounds of the French horn section and the hushed, sweet entrance of 80+ singers standing behind me.  Luckily, I had two key advantages:

It was liberating and magical.  Without the recording, I’m free to re-imagine how the music was played, re-inventing sounds and phrases.  My own imagination grants me a certain sense of fluidity and creativity because I am not confined to a digital recording.  I can re-interpret the music so that it will still feel fresh the next time I play it, making new discoveries because I don’t have a fixed idea in my head of how it’s supposed to go, only how I want it to go.

In some ways, I feel lucky that most of my early performances were not recorded.  If I really knew what I sounded like when I first started playing over 20 years ago, I probably would have gotten too discouraged to continue. Now that I hear other beginning musicians I realize why my brother always complained about my practicing.  At the time I blamed it on sibling rivalry, but now I have a different understanding of what was really going on.

I also have very few pictures of myself playing bassoon.  Every time I see one, I remember why I don’t have more.  For a wind player, the only good moment to capture a photo is before we start playing.  Once we’re in motion, it’s just not that attractive.  Judge for yourself in an artist’s rendition of me playing. 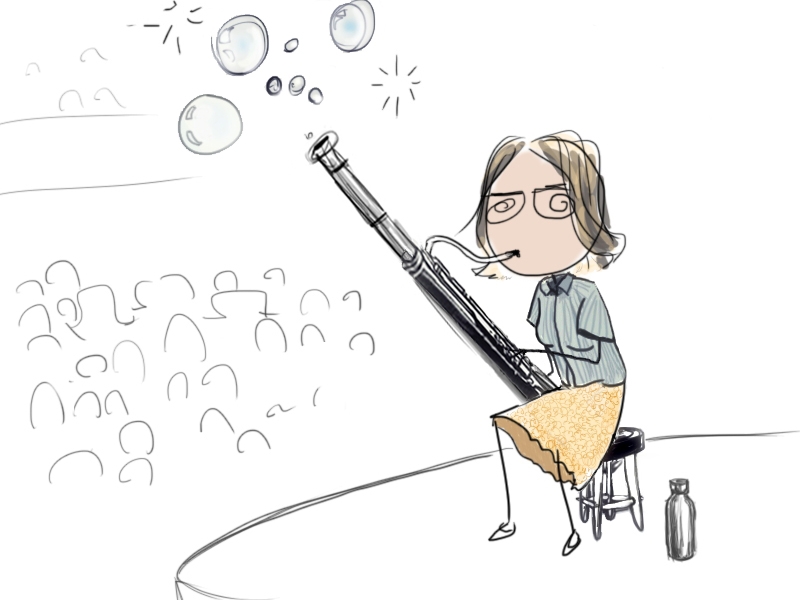