A friend of mine was telling me about a particular annoyance with communicating via text.  Her challenge, it seemed, was that she could never tell when the conversation was over.  She never knew when she was supposed to respond or just let the text conversation die out.

As a firefighter she’s accustomed to the easy, clear language used when communicating with a two-way radio.  Basically if a response is required the person says “over” at the end of his/her message.  If the person is completely finished and does not require a response, s/he says “over and out” signifying the end.

So why is this so challenging with texting?  Here are some possible reasons:

I read a few articles, all from dubious sources, that claim putting a period at the end of a letter, word, or phrase is seen as aggressive.  The example I saw most often cited was the difference between texting “k” (as in it’s ok) or “k.” (meaning you really messed up and it is definitely not ok). 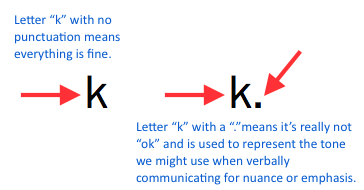 How someone could infer so much meaning from one letter and a humble period is really beyond me.  Maybe I’m just getting old.

Other examples include when and how to use question marks.  Apparently not using the question mark softens the blow of the inquiry.  And when all else fails, throw in some emoticons because clearly punctuation & texting can be confusing unless you’re in the know of all the extra meanings.

So for my friend struggling to know when a text conversation had ended, perhaps she could take a page from radio communication and end all her texts with “over and out” without a “.” so it’s not interpreted as being aggressive.

4 comments for “Over and Out”