It’s funny the things you learn about someone after they die. Or the things that can spontaneously trigger a memory of your departed loved one. June is always a hard month for me. Contained within a two-week period are my father’s birthday, Father’s Day, and the deathdays for both my grandfather (mother’s side) and my father. A month loaded with memory mines. 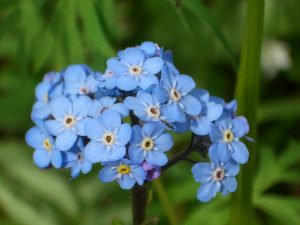 For those of us with less than perfect memories, recorded details of our loved ones serve as a starting point. Old letters or emails, journals and diaries, pictures, videos, etc. My father died before social media existed, but now we can also have things like Facebook pages, Twitter, and Instagram to find traces of our loved ones. A treasure trove of memories.

And yet nowhere in any of my father’s stuff did I learn that his favorite donut was a Boston Cream Pie. My mother told me one day. To be fair, my father was an indiscriminate eater. He had one of those mythic metabolisms that allowed him to eat everything and stay rail thin with lean muscle mass. He definitely had his favorite foods, but after he died, we were hard pressed to think of something he didn’t like.

Equally valuable are the things I experience and do that make me feel as though I can still be close to him. Small, random gestures and things that just kind of happen every once in a while. The kind of memories that are best felt by being in the moment, or having a conversation, and not scrolling through memorabilia.

I recall walking with my father one day. He looked at me and said, “Boy, I must really be sick.” He was already quite ill by this point so I couldn’t imagine what he was talking about.

“I just saw a penny and I didn’t bend down to pick it up.”

We no longer have pennies in Canada, but I still make a point of picking up change off the ground. It’s a small gesture, but one that now makes me smile. As though he’s sent me a small wave “hello.” Encapsulated in that tiny movement is a strong reminder of my father’s values, his humor, and the kind of person he was. It’s also an opportunity for me to appreciate my good health. A win-win.

Dedicated to all the great father’s in the world, alive and deceased.