Over the last several years, I’ve noticed a lot of people whipping out their phones during presentations or lectures to snap pictures of something on the projector. As the familiar adage goes “a picture is worth a 1000 words.” So whenever I see people taking pictures instead of writing, I can’t help but wonder do they also take notes? Is a picture enough to remember everything later? No caption? No explanation to go with the image or a title? How will these “notes” be found later in a collection of thousands of images?

I’m currently working on a college campus. Part of my job is to teach the students information literacy. The name of the class could also be “Using the library for research instead of Google.” Sometimes during the sessions it’s hard to gauge what, if anything, the students are absorbing. It’s tough to break through the ease and seduction of searching offered by Google. And the many misperceptions about the quality of results available on Google. Contrary to popular belief, the results on the first page are not always the most trustworthy, relevant, or best quality resources.

However, when I see students reach for their phones and start taking pictures of something I’m showing on the projector, I know something clicked for them. I’m always curious to see which things the students are interested in retaining since the phones appear at different moments in each class. Sometimes they take pictures of a link when I show them a nifty resource available to them through the library. Other times they capture the criteria we teach them for evaluating resources found on the internet.

In one class a student took a photo of the login screen that automatically appears if you try to access the college materials from an off-campus location. The login prompt, aptly named “Off-campus login” does seem self-explanatory, but I suppose having visual confirmation from the phone to the screen could help. 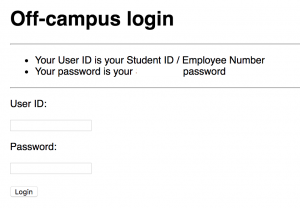 The only thing I recall taking pictures of are white boards after a particularly engaging brainstorm session when there isn’t adequate time to type up everything properly. And then it usually ends up sitting in my phone as a future task, something that “I’ll get to later.” I wonder how often other people end up referring to these pictures they take during lectures or presentations. And how much of the content gets retained.